Cryptocurrencies made it big in 2021, and part of the credit for their recognition can be attributed to the wild popularity of meme coins. These meme coins overwhelmed investors with their returns, setting much-needed benchmarks for this entirely new ecosystem of cryptocurrencies.

Dogecoin led the phenomenon, followed by many other similar coins including Shiba Inu. Market forces such as constant support from Elon Musk on Twitter and dedicated media coverage were accountable for their fair share of contributions as well.

Today, meme coins account for a considerable portion of cryptocurrency investments and continue to get many new investors onboard every day. However, a wave of skepticism has started to circulate among investors regarding the future of these coins. And to a certain extent, it is justified.

People are concerned if meme coins will exist in the future, and if they’re any worth at all. Don’t be surprised if you were thinking the same. But before you withdraw your investments, let’s take a look at the actual picture. Starting with, how we got here.

Where They Come From

The first recognisable meme coins found their inception in 2013, with Dogecoin being launched as a Litecoin fork, with many others that followed. Many of these became irrelevant in no time and are considered to be dead cryptocurrencies today, remembered by hardly anyone.

Few cryptocurrencies survived the rather unvalued market at the time, and one of them as you might have already guessed is Dogecoin. But before we understand how Dogecoin made its name, it’s important to remember that none of these cryptocurrencies was made to last. Most of them were just a joke, and nothing more.

As a result, meme coins didn’t receive any serious consideration and weren’t as prevalent in the market until a couple of years back.

It was the end of 2020 when a meme coin managed to grasp the attention of a significant number of investors. Since 2018, the coin didn’t show anything more than a sideways movement, but a few years following that, the coin was among the top 100 cryptocurrencies at that time.

Elon Musk played a big part in putting the coin under the spotlight. Lending consistent support to the coin even to this day.

The Dogecoin meme trend paved a way for new meme coins to be launched and created an independent market for a type of cryptocurrency we now know as meme coins.

Today, there are literally thousands of meme coins. Many with the same prefixes, acting as nothing more than a pyramid scheme. This brings us to an important aspect of meme coins- are they worth anything?

Here’s a chart of DogeCoin, representing the price action. 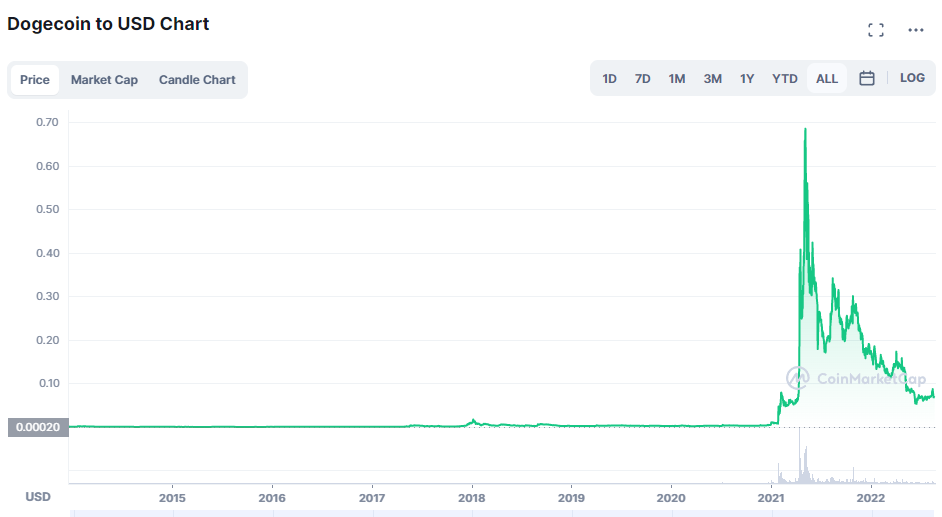 As we can clearly see, Dogecoin didn’t receive much of its attention until a few years back. While it did manage to soar to previously thought unfathomable prices, there came a time when the market started to question the value Dogecoins, and most other similar meme coins, bring to the table.

Spoiler Alert! It wasn’t much.

See, unlike other credible cryptocurrencies, meme coins don’t provide much utility to the user. Bitcoin for example became the most valued cryptocurrency because with itself it introduced a brilliant way to store value. Ethereum too enabled seamless smart contracts, and popularized the proof-of-stake consensus mechanics, solving a concerning limitation of Bitcoin.

Now, the market is unsure of the value meme coins have to offer. This is not to say that they’re invaluable, they aren’t. However, that’s true for only a few meme coins. As most of them are here only to make a seasonal appearance.

Are Memecoins Here to Stay?

Major meme coins, such as Dogecoin and Shiba Inu won’t die anytime soon. As it can be seen, they’re recovering from the recent market-wide crypto crash that led to the downfall of most cryptocurrencies.

The major problem with meme coins is the absence of their value proposition. They offer no utility, except for a flimsy investment asset. But this isn’t enough reason to kill every meme coin as some of them have too much value locked in them to undergo vaporization.

Major meme coins are here to stay. Either they’ll find a utility eventually, acting as game currencies or to be used to purchase merchandise, or just remain a speculative asset operational by investor confidence.

Another way meme coins could continue to stay relevant is by offering inherent value. Such as the one offered by Tamadoge. A play-to-earn crypto game currency, being lucrative to investors in more than one way.

As an investor, you don’t need to abandon the idea of investing in meme coins. Because they aren’t going anywhere. They’re here to stay. However, conduct proper research before you choose to invest in any cryptocurrency.

LINK Is Struggling to Push Northward